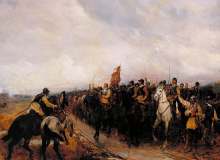 The Civil Wars (1637-51) were an intensely turbulent period in Scotland's History. Beginning with a revolt against Charles I, these years spawned the National Covenant (1638) and the Solemn League and Covenant (1643), under whose banner the Scots engineered a sweeping revolution, intervened in simultaneous conflicts in Ireland and England, experienced multiple spasms of civil unrest, and ultimately suffered defeat and conquest at the hands of Oliver Cromwell. The trauma of these events would shape Scottish History for decades to come