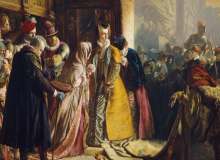 Running approximately from the early 1500s to the middle of the 1700s, the early modern period was an era of dizzying change for Scotland. Encompassing the Reformation, several civil wars, at least two revolutions, union with England, the rise and fall of Jacobitism, attempted Empire-building, and much else besides, this was an era that saw Scotland repeatedly transformed. It was also the period that produced some of the best-known characters in all of Scottish History, including John Knox, Mary Queen of Scots, the Marquis of Montrose, and 'Bonnie Prince Charlie'.

But how much do YOU know about early modern Scotland? From kings and queens to literature and witchcraft, our quiz will test you on the basics of Scottish History from the mid-16th to the mid-18th centuries. Good luck!