What is your faction in Restoration Scotland? 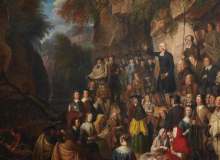 The Restoration (1660-88) was a tense and challenging period in Scottish History. As Scots worked through the ramification of the mid-century Civil Wars (1638-60) and tried to figure out what kind of kingdom they wanted, a range of often wildly diverging political visions emerged and competed. Many of these centred on the questions of religious conformity and whether Scotland's national Church should be Episcopalian or Presbyterian

Quiz topic: What is my faction in Restoration Scotland?