Which Of The Core 4 Are You? 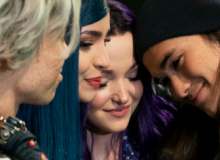 Which of the 'Core Four' are you? Sly Jay? Clever Carlos? Beautiful Evie? Or clever Mal? Find out your inner Mal, Evie, Jay, or Carlos by taking this quiz!

Quiz topic: Which Of The Core 4 am I?