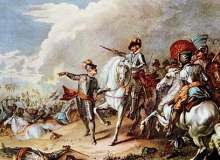 In the mid 17th century England (and the rest of Britain and Ireland) was convulsed by war and the ferment of intellectual revolution. As Parliament fought the King and then the Army, new ideas such as universal male suffrage and freedom of conscience combined and clashed with old ideas like the divine right of Kings and the ancient liberties of Magna Carta to give birth to a fissiparous melange of different factions and groups.

Have you ever wondered which faction you would have ended up in? Are you a Constitutional Royalist believing that Parliament had a point back in 1640 but it's really starting to push its luck now? A radical Leveller wanting a free press and universal male suffrage? A sly Army Grandee? One of the Presbyterians or Independents in parliament at each other's throats over the post war religious settlement? Perhaps you're an Arch Royalist who still believes the King is divinely appointed? Or maybe you think you chose the wrong side and wish you could recant and switch? Well wonder no longer because the 'Political compass: English civil war edition' will tell you!

You can find more quizzes like this one in our Politics Quiz category.