Which OC are you? 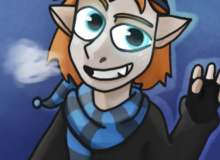 From my animated series I'm working on, called "Set Me Ablaze," or SMA. The majority of the characters are from Trident, the demon kingdom located mainly underwater, and all but one of them are part of the royal family.

There is only one result outside of this kingdom, so good luck getting that. Anyways, ignore any spelling errors, because I made this relatively quickly trying to level up. I might add pictures later, but probably not :)

Quiz topic: Which OC am I?