Are you a doomer, boomer or a zoomer 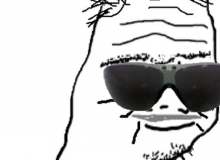 Have you ever wondered whether you are a doomer, a zoomer or a boomer? Take this quiz to find out! a Boomer is a person over the age of 30 that likes 80s Rock and Monster Energy Zero Ultra, that wants things to go back to the way they were. Doomer is a variation of the Wojak character that is typically characterized as an early 20's male who suffers from depression and has a bleak outlook on the world, in contrast to the 30 Year-Old Boomer. The character is often discussed on various 4chan boards in the context of mental health, drug addiction, economic strife and anti-semitism. Zoomer- Person born in generation Z typically a modern day teen who plays Fortnite and listens to cancerous rappers.

The Doomer meme was first seen posted to /x/, then to /r9k/, where another commenter paired various "Doomer" traits with a screenshot of Ryan Gosling from Blade Runner 2049. From there it spread widely. To read more about the origins of the Doomer character, see the knowyourmeme page.

Quiz topic: Am I a doomer, boomer or a zoomer You can find more quizzes like this one in our Generations and Identity categories.