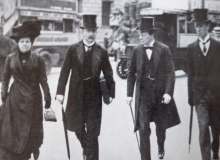 Do think that the Edwardian era was all about sedate garden parties, country house weekends and the King dandling his mistresses on his knee? Wrong! The period between the end of the Victorian Era and the commencement of the First World War was one of extraordinary political upheaval and conflict. From the conflict over Irish Home Rule to the militancy of the suffragettes, from the tumultuous battle over the People's Budget and Lords reform to industrial discontent initiated by a hungry and militant working class, Britain in this era was a powder keg of discontent.

New groups, ideas and parties formed. The Labour Party was founded, feminism found its feet, and the Liberal Party transformed itself. Towering political figures such as Lloyd George, Winston Churchill, Edward Carson, the Pankhursts and Keir Hardie emerged. Who would you have been? A militant suffragette? A placard-wielding weirdie-beardie member of the ILP? A spluttering reactionary Tory diehard? Let's find out!

Created by: Capel Lofft of Find me on Twitter:
(your link here more info)