Which Schuyler Sister from Hamilton are you? 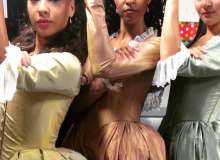 Everyone who’s watched Hamilton knows about the Schuyler Sisters— Angelica, Eliza and Peggy (dressed respectively in pink, green and yellow), who play a big role in Hamilton’s life.

Quiz topic: Which Schuyler Sister from Hamilton am I?