Which Power Punk Girl Are You? 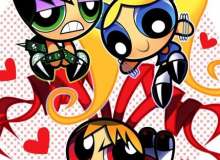 The Power Punk Girls were created by Oppressor Plutonium. The PPNKG's are made of salt, vinegar, and everything nasty (and Chemical X). They have similar proportions as the Powerpuffs: large heads, large eyes, and small bodies; however, unlike the Girls' uniformed outfits, one stripe and white tights and black Mary Janes, the Powerpunks wear different style outfits than each other. They live in a different City (Vilestown). However, they like to destroy everything, gross people out, and dominate their surroundings. Oddly enough, the good in Townsville (Professor Utonium, Blossom, Bubbles, Buttercup), and the bad in Townsville (Mojo Jojo, Him, The Amoeba Boys, Fuzzy Lumpkins), are reversed. They get to Townsville through a heart mirror in their room which serves as a portal to their universe.

Quiz topic: Which Power Punk Girl am I?