Which CLANNAD girl is for you? 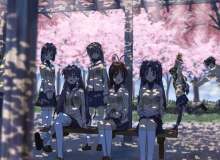 Clannad ( Kuranado) is a Japanese visual novel developed by Key and released on April 28, 2004 for Windows PCs. While both of Key's first two previous works, Kanon and Air, had been released first as adult games and then censored for the younger market, Clannad was released with a rating for all ages.

The story follows the life of Tomoya Okazaki, an average high school student who meets many people in his last year at school, and helps resolve their individual problems. Clannad contains a varied casting of characters. Which of them should specifically attract your attention?