Which Archer Tribe Do You Belong In? (Warrior Cats) 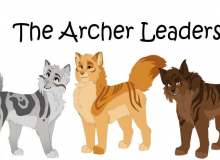 This is a quiz about my own type of clans I created called the Archers. We have the Golden Archers, who are the brave and loyal. The Silver Archers, who are smart and outspoken. And then we have the Bronze Archers, who are ambitious and determined. Which tribe will you belong to??? (HUGE Credit to Purespiritflower for the cover cat art)

Quiz topic: Which Archer Tribe do I Belong In? (Warrior Cats)