The Forest Packs: Part One 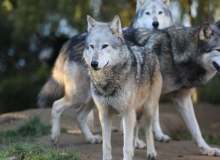 You will be role-playing as a white female wolf with blue eyes named Bright Beam. You are in the Amber Flight Pack, which is one of the Forest Packs. The other packs are River Tide Pack, Mountain Top Pack, and Forest Shade Pack.

Map: Mountain Top Pack is in mountainous regions, and a large water flows into River Tide territory. River Tide's territory is near a big lake with a river running out of it. This river becomes another waterfall in Amber Flight territory, which is in a peaceful forest. Nearby is Forest Shade pack, which is in a denser forest with many cave systems. Hope you enjoy :3