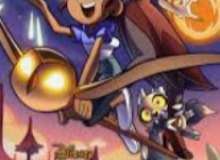 The series follows self-assured teenage girl Luz, who discovers a portal to another realm where humans are not well-liked. Luz partners with a rebellious witch named Eda and her diminutive demon sidekick, King, who was indeed once a king and is searching for a way to restore his titles and glory. Despite not possessing any magical abilities of her own, Luz pursues her dream of becoming a witch by serving as Eda's apprentice and learning the ways of magic.Picking up immediately after season one, season two will "find our heroes working together to return Luz to the Human Realm, help Eda confront her inner demons, and search for the truth about King's past".S

Owl House has received a positive reception from critics. Emily Ashby of Common Sense Media rated the show 4 out of 5 stars and said putting different elements together made the series quirky and likable. It was also described as well written and animated, and speculated that "the show likely will be one you will want to watch alongside your older kids and tweens, giving you the opportunity to discuss these kinds of themes as they come up." LaughingPlace.com's critic praised the series for its unique visuals and voice acting, stating "The performances fit together beautifully as the diversity in their delivery showcases the characters’ unique roles in the Demon Realm." Collider's Dave Trumbore gave the series' first episode a 4-star rating, feeling that the episode "has got a dark, yet darkly comic edge to the whole thing." The conservative evangelical Christian religious television network, called the Christian Broadcasting Network attacked the show, declaring it was part of a "witch agenda to make witchcraft look positive," an assessment that a writer for The Mary Sue called "hyperbolic," and stated that a "rebellious Latina witch" is, to those like CBN, "probably the scariest thing," while stating that the show sounds like "a ton of fun." While Kevin Johnson of The A.V. Club was critical of the series, stating that they were not "buying the developments between Amity and Luz," and praised Eda's character, Ben Bertoli was more positive. He wrote that Terrace and those…