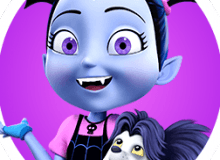 Hi!!!! Vampirina here. I know you don't really have allies in slither.io. There's no such thing as teaming in that game. It's everyone against everyone.

Despite that, there are a few slithers that I like, that I consider my allies. The slithers are the ones that I don't kill, and the ones I like. Are you one of my allies? One of my enemies? Or perhaps just there? Find out in my slither.io quiz series!

And don't forget, you can make your own quizzes at GoToQuiz! Why not give it a try?