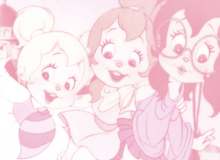 "The Chipettes" consist of members Brittany, Eleanor, and Jeanette. Despite being sisters and close friends, each of these Chipmunks possess distinct personalities. Which Chipette are you?

Quiz topic: Which Chipette am I?