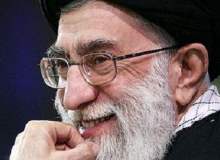 The Iranian Revolution known as the Islamic Revolution or the 1979 Revolution refers to events involving the overthrow of the Pahlavi dynasty under Mohammad Reza Shah Pahlavi, who was supported by the United States and eventual replacement of 2500 years of Iranian monarchy with an Islamic Republic regime under the Grand Ayatollah Ruhollah Khomeini, the leader of the revolution, supported by various leftist and Islamist organizations and student movements.

Demonstrations against the Shah commenced in October 1977, developing into a campaign of civil resistance that included both secular and religious elements and which intensified in January 1978. Between August and December 1978 strikes and demonstrations paralyzed the country. The Shah left Iran for exile on 16 January 1979, as the last Persian monarch, leaving his duties to a regency council and an opposition-based prime minister. Ayatollah Khomeini was invited back to Iran by the government, and returned to Tehran to a greeting by several million Iranians. The royal reign collapsed shortly after on 11 February when guerrillas and rebel troops overwhelmed troops loyal to the Shah in armed street fighting, bringing Khomeini to official power. Iran voted by national referendum to become an Islamic Republic on 1 April 1979, and to approve a new theocratic-republican constitution whereby Khomeini became Supreme Leader of the country, in December 1979.