Top > About You > Personal Qualities 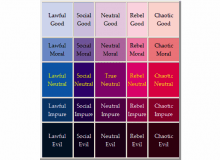 This is a more realistic system than the original 3x3 moral alignment (which has a total of only 9 alignments), and allows for preference towards a certain axis, such as a traditionally Lawful Good character who is more good than lawful (Social Good), or a traditionally True Neutral character who still prefers to help people than to hinder them (Neutral Moral).