What Character Are You In My Fantasy Story? 7 Results 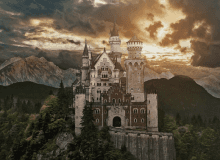 In this quiz, you will be seeing which of my characters you relate the most to! Isn't this exciting? There are seven possible results as I mentioned in the title. Now, you only really need to read this paragraph, but you can read the next if you want more background information ;)

The characters are all part of a fantasy world even though it is in fact earth. It takes place in the future where races have been discovered. Whether they were genetic mutations or species in hiding nobody knows. Due to their appearance, some civil wars have broken out and some are still going on, however they are all referred to as one thing - The Grimm War (is this Copyrighted? Lmao I spent 3 hours on this quiz) Because it's like a fairytale come to life, however it's more like a nightmare. Also, some countries have "reverted" in a sense, where instead of incredibly large cities there are kingdoms, more rural areas, etc.. Some have embraced the fantasy like world while others just try to evolve with them. These are known as Rebirthed Countries. All of the possible characters live in a Rebirthed Country, and all know each other.

Quiz topic: What Character am I In My Fantasy Story? 7 Results