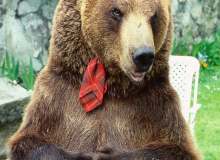 Hercules the bear was the amazing and magnificent grizzly bear that was raised by a Scottish couple in their home. Hercules had a fantastic life, including taking part in wrestling matches and appearing in James Bond movies. Hercules was very loved and was even good friends with his owner's horse!

In this cool quiz, find out just how much you are like Hercules because being like the brilliant Hercules the bear is an awesome thing! Btw, in Question 5, the kittens being referred to are the kittens that when Hercules was a cub, his owners had to look after some kittens and he got jealous

Quiz topic: How Much am I Like Hercules the Bear?