WHICH OF THE DAZZLINGS ARE YOU? 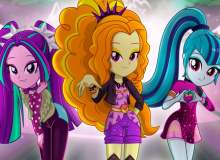 Everyone hates villains,even the evil Sirens, but who wouldn't like to know which of the Dazzlings you're like most? While the Dazzlings might not be lovable, they're attractive and beautiful, and we all want to know a little more about them!

This Quiz is perfect for anyone who watched Rainbow Rocks or Sunset's Backstage Pass, both which they're featured in. Their songs are equally popular, like Under our spell and Let's have a battle. Evil songs are few in the Equestria girls series but the Dazzlings songs rule! And now we're going to see which of the Dazzlings you are. Adagio, Aria, or Sonata? Don't ask me, take the quiz!! xoxo

Quiz topic: WHICH OF THE DAZZLINGS am I?