How Clitheroe Are You , Two 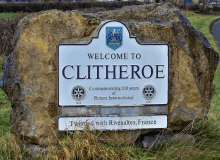 The name Clitheroe is thought to come from the Anglo-Saxon for "Rocky Hill" and was also spelled Clyderhow and Cletherwoode. The town was the administrative centre for the lands of the Honor of Clitheroe. These lands were held by Roger de Poitou, who passed them to the De Lacy family from whom they passed in 1311 to Thomas, Earl of Lancaster and subsequently, to the Duchy of Lancaster. At one point the town of Clitheroe was given to Richard, 1st Duke of Gloucester. Up until 1835 the Lord of the Honor was also by right Lord of Bowland, the so-called Lord of the Fells. The town's earliest existing charter is from 1283, granted by Henry de Lacy, Earl of Lincoln, confirming rights granted by one of his forebears between 1147 and 1177

The town elected two members to the Unreformed House of Commons. The Great Reform Act reduced this to one. The parliamentary borough was abolished under the Redistribution of Seats Act 1885. It was one of the boroughs reformed by the Municipal Corporations Act 1835, and remained a municipal borough, based at Clitheroe Town Hall, until the Local Government Act 1972 came into force in 1974, when it became a successor parish within the Ribble Valley district.[10]Since 1991, the town of Clitheroe has elected at least 8 out of the 10 Liberal Democrat borough councillors on Ribble Valley Borough Council, while Clitheroe Town Council has been Liberal Democrat-controlled for that period too. Likewise, since 1993, the town has elected a Liberal Democrat County Councillor to Lancashire County Council.Clitheroe was one of earliest seats to elect a Labour MP, when David Shackleton won the 1902 Clitheroe by-election for the Labour Representation Committee. He was the first Labour MP to win a by-election, and the third ever elected. He was returned unopposed, but easily won the subsequent 1906 general election, at which he was challenged by an Independent Conservative. Shackleton was General Secretary of the Textile Factory Workers Association, and at the time, there were a large number of mill workers living locally. Labour lost the seat at the 1922 election, and did not regain it until their 1945 landslide victory. The Conservatives won the seat back at the next general election, in…

Quiz topic: How Clitheroe am I , Two